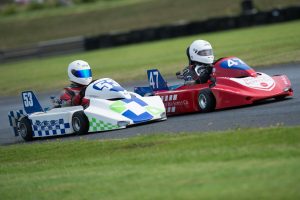 Massive May Meeting Marks 60 Years of The Mini!

This Saturday 25th May sees the biggest car and superkart race meeting of the year so far, at Kirkistown Race Circuit in County Down.

And you can get free entry if you arrive in a Mini!

A massive sixteen race programme will be a spectators delight!

Top of the bill will be three races for the Celtic Speed Scottish Mini Cooper Cup. The last time that these folk came to Kirkistown some years ago, they put on an amazing show! Robbie Dalgleish, who has won five out of six rounds already this year, will be there. Mark Geraghty, who won the sixth race, is coming too. Don’t be fooled by Fiona Kindness’s name. She holds her own with the boys!

The other three-race set is for the incredibly fast Superkarts. Expect close racing from Lisburn’s Liam Fox, veteran Colin Menary and lap record holder, Stuart Coey, all in 250cc machines. In the 125cc class, Aaron Newell and the two Comber Crossans, Peter and Alan, should be at the sharp end.

The two races in the Dawson-WAM NI FF1600 Championship will be closely fought out. The Randalstown Rocket, Alan Davidson, has been in incredible form so far this year but his racing nemesis, David McCullough, from Ballymena, has been challenging him all the way. Keeping them both honest has been Lisburn’s Will Herron, who is bound to hit the top spot soon. Another Lisburn man, Scott Finlay, has been steadily improving since last year. He may well be disputing the podium positions as well.

The Saloons are being joined this time by the Scottish Fiesta STs. Templepatrick’s Gerard McVeigh is debuting his very quick Honda Civic. Nutt’s Corner driver, Donal O’Neill, will be there or thereabouts in his Seat Cupra while the BMW330i class will be fought closely by Derry’s Gavin Kilkey, Lisburn’s Greer Wray, Dundonald’s Keith Wray and Clonmellon’s Pete Murray.

Newtownabbey’s Jim Larkham will be hoping to get his 2019 Championship challenge back on track, after a difficult start this year in the Roadsports. Jim’s misfortune has been amplified by the scintillating form of septuagenarian, Ivor Greenwood, from Dundrod. Lisburn’s Paul Conn, has been upsetting both of them with his pace! Any one of these three could win. There will be no room for errors!

The Future will be represented by the Ginetta Juniors. This is a class for 14 to 17 year olds. Matthew Nicholl, from Limavady will be in the thick of it, as will Christopher Grimes, from Baltinglass and Jack Byrne from Foulksmills.

The Kirkistown Fiestas are combined with the Mazda MX5 class. In the Fiestas, expect a great drive from Megan Campbell, from Strangford, who went exceptionally well on her debut last time out. Belfast’s Desi McGlade will be right beside her, while Carrickfergus driver, Michael Mulholland, has been getting quicker in his new, for 2019, car.

In the Mazdas, there are three previous race winners, Tandragee’s Stephen Murray, Nutt’s Corner’s Eórann O’Neill and Ballyhalbert’s David Cousins. Add to that a very quick father and son duo from Carrickmacross, Jim and David Kennedy, plus Newtownards man, Craig Brown, and this heady mix will provide a great spectacle.

That business about free entry in a Mini? Simple. Anyone who turns up at the gate as a driver or passenger in a Mini, including BMW Minis, will get free entry, to celebrate the 60th anniversary of this iconic car! For everyone else, 16 years or older, the entry fee is £10.

There will also be some displays of Minis, old and more recent, for spectators to appreciate.

Qualifying will start at 9:00am, with racing following on immediately, around 11:30am.

There are great catering and refreshment facilities on the infield at the circuit.